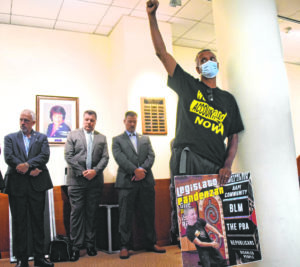 Kurt Kronenberg holds up a sign criticizing Legislator Josh Lafazan during a legislative hearing on Aug. 2. (Photo by Frank Rizzo)

Lots of fingers were pointed at Legislator Josh Lafazan over the course of a long Nassau County Legislature meeting at the government center Aug. 2. The Independent from Woodbury, who generally caucuses with the Democratic Minority, had introduced a bill that adds civil protections for on-duty first responders. But law enforcement was the focus of the contentious and at times raucous public hearing to discuss the proposed bill.
According to its provisions, it will impose fines of up to $50,000 to suspects if first responders are injured or harassed in the course of a riot.

It was nearly 8:30 p.m. when the legislature, by a 12-6 vote, with one absence, passed Clerk’s Item 187-21, described in the agenda as “A local law to amend the Nassau County Administrative Code in relation to amending the Nassau County Human Rights Law to preclude discrimination against first responders.”

The bill will now go to Nassau County Executive Laura Curran for her signature. She told Anton Media Group the following day that she has some questions about it. In a statement, she said, “I’m proud of the dedicated first responders who’ve made Nassau the safest county in America and I will continue to stand against defunding the police. My administration is committed to protecting the brave men and women of law enforcement who keep us safe. There were many speakers [Aug. 2] who questioned this legislation. Now that it has been passed by the legislature, I will be making an inquiry to the Attorney General’s Office to review and provide some advice.”

In her letter to Attorney General Leticia James, Curran described the law as making it “an unlawful discriminatory practice for any person to harass, menace, assault or injure an individual due to such individual’s status as a first responder and would prohibit such practices. Further, it would create a private right of action for first responders claiming to be aggrieved under the law and empower the County Attorney to commence a civil action to enforce fines against violators.”

Union Chiefs In Favor
Commissioner of Police Patrick Ryder did not speak on the bill at the hearing, but said in a statement, “The protections of our first responders, residents and communities must always be a priority. The legislature will have an opportunity to discuss and evaluate this bill on its merits and we look forward to its decision.”

Four law enforcement union heads weighed in on the bill, giving it their unqualified support. Brian Sullivan of the Corrections Officers Benevolent Association argued that “It’s the judgment of this legislative body and the direct experience of those of us in law enforcement that the recent pattern of widespread attacks and lawlessness and intimidation directed at law enforcement has undermined the civil liberties of the communities at large. This legislature, in its intent, disavows any excuse to minimize the gravity of incidents of law enforcement misconduct that have occurred anywhere in this country, especially those that may have been motivated by racial intolerance. Law enforcement does in fact join in condemning such misconduct.”

He added, “But those acts of misconduct by law enforcement can never under any circumstance justify the vilification of all law enforcement and any acts of violence whatsoever directed at law enforcement, including the correction officers that I represent.”

Sullivan asserted that law enforcement underpinned constitutional protections and to leave its members open to injury or harassment without recourse would undermine everyone’s civil liberties.

Tracey Edwards, Long Island regional director of the NAACP, was unsparing in her criticism of the bill’s main sponsor.

“He has lost his way,” she said, pointing at Lafazan. “Enough of this, Josh. Run a fair campaign and lose or win on your merits. You stand up and do what’s right. Don’t be a hypocrite. You are dragging all of your colleagues into this because of your political cowardice. Shame on you.”

Addressing Presiding Officer Richard Nicolello, Edwards said, “Don’t have this [law as] the legacy of Nassau County because Josh has lost his way. He has lost the respect of our communities forever more, but all of you have not.”

LGBT Network CEO David Kilmnick mentioned several groups that needed protection, pointedly adding, “The threat of police officers being attacked just because they’re police officers is a bunch of nonsense. And you know that (applause).”

He accused the legislature of failing to add the transgender community as a protected class “How dare you sit here today and tell all the transgender community that a profession is more worthy of protection than their lives?” Kilmnick charged. “Do the right thing. Vote no on this bogus bill that is flawed in every way, and while you’re in the mood to look at human rights and discrimination, add gender identity and expression into the Nassau County human rights law.”

Assemblyman Charles Lavine (D–Glen Cove) was troubled by some of its constitutional implications and urged legislators to table the bill until more residents can become aware of it and weigh in on it.
Lafazan Responds

“I sponsored this bill and I support this bill,” Lafazan said at the start of the legislative debate and vote. “My bill takes behavior which is already criminal—and has been for many years—and simply adds a civil component under the human rights law.”

He reminded his colleagues that they had voted unanimously to make first responders a protected class in 2019.

“Police have been authorized by the state to sue for negligence and intentional harm since 1996, [so] this [bill] should not alarm anyone,” he continued. “Moreover, the crime of harassment and menacing have been on the books for a long time and yet we’ve never seen them used to suppress freedom of speech like the critics have alleged. Why do we think that it will have that effect now? And why shouldn’t we trust the American judicial system to apply these laws in a constitutional manner civilly, just like they have been applied in a criminal context?”

Co-sponsors Arnold Drucker (D–Plainview) and Ellen W. Birnbaum (D–Great Neck) withdrew their sponsorship and voted against the bill. Delia DeRiggi-Whitton (D–Glen Cove) voted in favor. A vote to table the bill fell short, 9-8, with Denise Ford abstaining. She is a Democrat who caucuses with the Republicans.

Suozzi Calls For Hochul’s Use Of State Aircraft To Be...